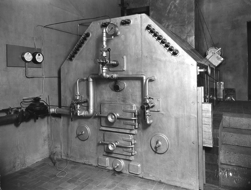 1932    The first cremator was delivered to Malmö Östra Crematorium in Sweden. The construction was based on German technology from Volckmann & Ludwig (VL).

1946    Mr Tage Borgkvist took over as owner and Managing Director. The name TABO was created from his initials TAge BOrgkvist.

1962    The first Tabo furnace outside the Nordic countries was installed. It was two G-VL-furnaces installed in Groningen in Holland.

1979     The subsidiary company Tabo SARL was formed in France. This company was later taken over by French investors, became Tabo INEX, which later developed into Facultatieve Technologies.

1983     In Australia the subsidiary, TABO AUSTRALIA PTY LTD was formed. This subsidiary is sold in 1985 and independent company TABO PARSON is formed.

1990     The first mercury filter was installed in Vänersborg, Sweden.

CREMATEC has delivered close to 500 cremators in 30 countries, and new ones are installed every year